What I learned from 4CC volunteer-伊藤美月

My job was to work at the accreditation center inside the hotel. At the accreditation center, we had to give out IDs, vouchers, brochures, and gifts to the participants. It was hard when lots of people came at once. In spite of the tough work, I was happy because I got to make friends and help each other. However, on the last day of the competition, I had a work at the arena and came up with a small problem. During my duty there, one woman came up to me and told me that she wanted her banners back since her flight was on that day. Soon I figured out that she was Japanese, so I started to talk to her in Japanese and ask when she could get back her banner to the Taiwanese volunteers in English which I translated into Japanese for the woman. I figured out that the banners will be taken off after all the program for that day ends, so I told the woman to come back to the entrance of the arena after the competition ends in order to give her back the banners. After my short duty at the arena, I had to go back to the hotel to do my rest of the duty.

When the competition ended, it was end of my duty as well, so I went back to the arena to find the banners taken off from the audience seats. Since I wasn’t the volunteer to work at the arena, I found my other Japanese volunteer’s buddy and I told her all the stories and asked if she could help translate to the other Taiwanese volunteer, which we were able to find and give the banners back. When I was giving back the banners to the woman, many other Japanese audience who put up the banners gathered around me telling that they wanted to get back theirs as well. The buddy and I had to go get and give back the banner several times, however, it was satisfying because I was able to use plenty of English and Japanese to solve this problem. And I really appreciate the Taiwanese buddy for translating Chinese into English for me.

Through this experience, I learned that being an interpreter is very difficult. At this volunteer work, it is not translating to friends but to someone you don’t know at all and have to use business English. I thought that learning how to speak English and to speak business English is completely different. Speaking English in business situations requires more responsibility. Which made me more interested in getting a job using English and helping others, especially when I cooperated with the Taiwanese volunteer to come up with a solution. 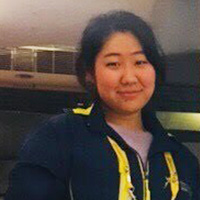