I applied for a volunteer of this event, because I had never experienced to work in foreign country with foreigners.

Four Continents Figure Skating Championships 2016 was held in Taipei, Taiwan. I applied for a volunteer of this event, because I had never experienced to work in foreign country with foreigners. I worked there as a student volunteer for 6 days. I was in the Venue team, and mainly my job was to check tickets and guide audiences. Also, I prepared for a victory ceremony in a skate rink.

I have many memories that I cannot forget in the volunteer work. The time when I helped the audiences and they appreciated me is one of them. I was glad to hear that and enjoyed working there. Then, I got confident that I could work in the foreign country.

While volunteering, I also had opportunities to speak English with other non-Japanese volunteers and audiences. Even though I studied English in my university, I did not have a lot of opportunities to talk with foreigners in English. Therefore, the situation that I needed to speak English was a great opportunity for me. In addition, as all volunteers cooperated together, I got a precious friendship. I spent a lot of time with them not only at work but also in free time. I enjoyed communicating with them a lot.

However, sometimes I felt difficulty in a conversation because I could not explain things clearly to others. Even though others are also university students, they can speak English very well. Then, I thought that I want to speak English more fluently as well as them. These difficulty and friendship gave me a motivation to study English harder after I came back to Japan.

Besides my English skill, I realized the other difficulty which comes from a feature of Japanese communication. Japanese is known as a high-context culture that people do not say things clearly and people read a line more than saying. When I translated from Japanese to English during the volunteer, I expressed indirectly. That is why, Taiwanese volunteers made what I said clear later by paraphrasing. Also, they said ‘You need to explain more detail.’ to me, while talking. I realized that how I communicate with people. In the global situation, I need to communicate with foreigners with recognizing this high-context communication feature to understand each other. Then, the communication style that Japanese have is needed to be considered in English-language education in Japan. 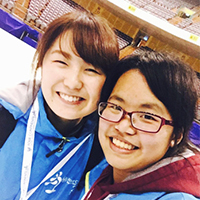